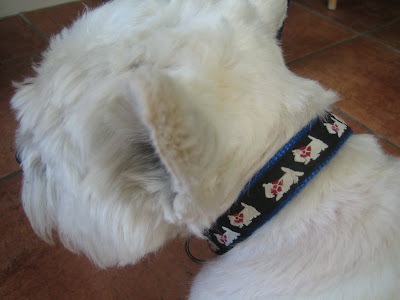 For fashion conscious readers of this blog, Gail has persuaded me to model my 'best' collar, rarely worn, but fitting for this special post, my one hundredth!
For the more serious minded  (I count myself in this category), I would like to share with you my latest scientific hypothesis....
Many of you will already be familiar with the ideas of String Theory, a construct which combines quantum mechanics and general relativity into a quantum theory of gravity. One prediction of this theory is that there are a near infinite number of parallel universes, i.e. a 'multiverse', that together comprise all of reality.
For a theory to be scientific, it must be testable, and until now, a a major problem with the multiverse is that this testability criterion has not been met.
I say until now because, with the help of my blogging friends, I think I have this one cracked!
For we already have several examples of parallel universes in the dog blogosphere do we not?
Think of Petey and all his pals, simultaneously in their own homes and having the most amazing adventures in Scotland. It seems that Asta is both in New York and at the Rodeo in Montana with Baby Rocket Dog and Hootie. Martha and Bailey appparently saw me in Mugdock Woods, when I was also staying beside Loch Torridon.
I notice that the Barkalot Boys have started to ponder this problem too. Mindful (as was Charles Darwin  when he heard that Alfred Russel Wallace had also hit upon the idea of natural selection) of the need to establish scientific priority, I have decided to write a paper detailing this evidence, a major advance in theoretical physics, without further ado. 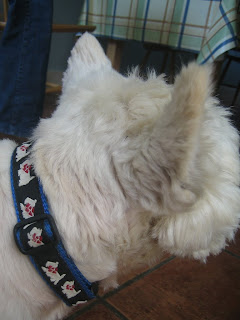 Any further relevant data that my blogging pals can contribute will be gratefully received, and of course properly acknowledged in future publications.
A Nobel Prize beckons, surely?
Oh, and here's another picture of my collar.
Posted by Hamish Westie at 11:12

Well done on your 100th post. Your collar is lovely, where did you get it?xx

WOOO! Congrats on that 100th post, I love the collar, it is so you.
Now expanding on your theory, I was in Florida and Scotland visiting my Snoop, without Mom even noticing, my missing self... hmmmmmm....
too much for this Barbie brain to ponder
-Kira The BeaWootiful, but not too smart....

By jove, I think you've cracked it Old Man!

And just think, you were simultaneously traveling aboard the Royal Scotsman whilst hanging out with Gail by the loch- does that qualify for time travel?

Shall I book a trip to Stockholm on AireRuby for the gang when you accept your award? Always thought you were a nobel fellow!

You are way ahead in your parallel thinking and well deserve that collar! Congrats on reaching 100!

"SOMETIMES WE SITS AND THINKS and sometimes WE JUST SITS!"
(But I think I need my Mom in this parallel universe stuff..Yep, she certainly is on a different plane!"
Lurve Maxdog in South Africa

When you win the Nobel prize, we think we will have to come to Scotland to celebrate.

Hi Hamish
Congratulations on your 100th post - we always like to read your blog as you make us laugh - today was no exception!
Loved your collar - very cute indeed!
We would be happy to help into any research you are doing as to how you can be in different places at once.
We ourselves have recently attended a wedding in Oz, been up at Bassetmoral with your goodself and a trip to the Mull of Kintyre!
It's a mystery!
If any dog we know will get a Nobel Prize it will be you - nothing surer.
Looking forward to the next 100!
love and kisses
Martha & Bailey xxx

Happy 100th Post, Hamish! I really wish I could share your interest in this scientific theory, but alas, my brain is just not equipped for such thinking.

It doesn't stop me for admiring you, though, for being the deep thinker that you are. I would be thrilled to see a Nobel come your way. I like your new collar too.

We're afraid we're not going to be able to add to your data. We've not learned how to be in two places at the same time. We were very aware of all the geographic changes as we were transported from one part of the country to the other. There were obvious changes in climate. And food. Furthermore, we THOUGHT we saw Lorenza on the beach, but it turns out it was not she, but instead an imposter. We're sure you're on to a good idea though, and we encourage you to continue with your hypothesis. If we ever figure out how to be in two places at once, we'll let you know!

A little baffled,
Jake and Fergi

You look so fashion with your collar! Pawsome!
Kisses
Rufus and Indie

I know what Gail means, Hamish. We were out for a walk and ran into a Scotsman and when I tried to join in the conversation, he said "Och, now there's a real Scotsman, full of noise and nothing to say!"

Hmmm. We think we used up the last fragments of our brain cells when we left a comment here a day or two ago. And either we said something inappropriate, we forgot to hit the send button, or our comment got lost in another dimension. But it appears to be gone now. And there is no way we can remember we said. We can't even remember if we've eaten our last meal (and we usually default to a negative response.) Anyhow... we DO think you are brilliant and you deserve a No bell prize. Or even a Bell prize, if a cat comes with it.

See ya later, wise one,
Jake and Miss Fergi

Congrats on your 1-0-0! Good work old boy! Your collar is very natty. You are such a fashion plate.
XXOO-Your devoted fan, BabyRD

The Black and Tans. said...

Blimey Hamish you are dead clever. Must be all that Highland Spring Water you drink!

Congratulations on your 100th poat.

It be one of those unsolveable mysteryies I thinks. Well, by peoples anyway. I sure we dogs can figure it out.
~lickies, Ludo