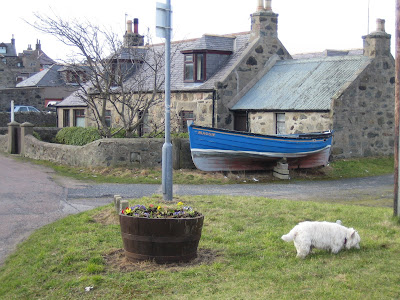 We didn't go round to Margaret's for Deutschklasse this week (why not??). Just to show that I have learned something other than where best to look for chocolate whilst the ladies are struggling with their adjectival noun endings, I've found a good German title for today's post.
Sadly, it seems I'm not going to get a trip to New Zealand anytime soon. But looking on the bright side, now that the snow has gone, my paws are feeling better, and we have a few more precious hours of daylight, there are still lot's of opportunities to go exploring my beautiful homeland. 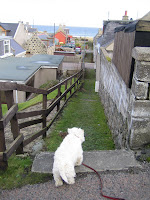 I was born and spent my first three years on a farm just outside 'The Broch'. That's Fraserburgh, to the uninitiated. OK, I'll admit that when foreign folk think of Bonnie Scotland, they probably don't have Fraserburgh and the nearby St Fergus gas terminal in mind.........But anyway, Gail and I went up to that area for a visit last weekend, and spent a splendid afternoon exploring the old fishing village of St Combs, and walking through the sand dunes down to the Loch of Strathbeg. Such lovely soft grass and sand, so gentle on the paws. We walked five miles and saw only one other dog and its person. 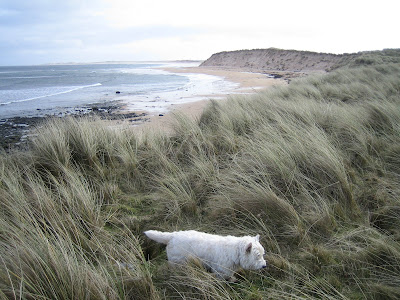 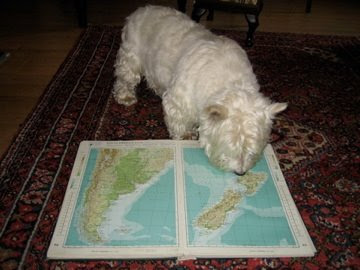 Oh dear! It seems that Naomi has gone for good.
Of course, it hadn't escaped my notice that she was packing her suitcase. So I was a bit worried. But it only occurred to me after a few days and a thorough inspection of her bedroom, that all her stuff has disappeared, which doesn't normally happen if someone's just away on a short holiday.
Gail has now explained to me that Naomi's moved to somewhere called 'New Zealand'. Now my geography goes a bit fuzzy south of Hadrian's Wall, but Gail showed me where it is in the atlas. Apparently New Zealand is about as far away from Scotland as you can travel, without being an astronaut. Well I'll try not to take it personally.
I did like Naomi, despite her stern line on the cheese-treats issue.  I hope Gail finds another lodger who's as good at locating the areas where I like best to be stroked.
I wonder what New Zealand smells like. I do love to travel. Can you get there by train? Maybe one day we'll go there to visit......
Posted by Hamish Westie at 09:33 7 comments:

The canine approach to science

I think I've mentioned before that this is a scientific household. Well this week I've been doing a bit of research myself.

I found this cartoon on the Internet. To me, it seems to represent an entirely satisfactory re-interpretation of a tired old experiment. 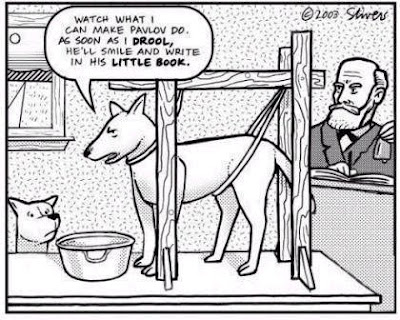 Gail is wearing her most sceptical face, and muttering some rubbish about dogs not understanding the scientific method.

Well I've found a couple of quotes, which she would do well to ponder if she really thinks she's going to get that PhD:

"Research is to see what everybody else has seen, and to think what nobody else has thought". Albert Szent-Gyorgi.

It's really not fair to make fun of a chap just because he's got short legs, now is it?
Gail seems to imagine that I can't understand when she's telling friends stories about me. Well let me tell you I'm getting quite fed up of hearing her treat my exploits in the Cruickshank Gardens last week as one big joke.
It didn't seem pointless to me, trying to chase after that elegant, graceful young roe deer. So OK the snow did slow me up a bit, and I do tend to lose speed after the first twenty yards. But still, it's very hurtful to hear Gail laughing and going on about how even her eighty-seven year old father's faster than me these days.
I still have my pride, you know.
Posted by Hamish Westie at 21:32 3 comments:

The wrong kind of snow

Railway travellers in Britain will be familiar with the concept of 'the wrong kind of snow'.
Well let me tell you that a Westie's progress too is dependent on the cold white stuff being of the correct texture and consistency. Especially if that Westie is a older chap with sensitive paws.
Wet snow's just horrid and cold. Frozen wet snow forms ice crystals that feel like you're walking on broken glass. Well-trodden snow becomes all slippery, a challenge to stability, although low- slung dogs do fare better than poorly designed bipeds.
And have you ever come across the snowball problem? I think it only happens to us longer-haired breeds. Snow clings to the fur on your legs then melts and refreezes into hard little balls of ice, and eventually you grind to a halt, weighed down by what looks like a bunch of grapes hanging off each limb. If you're really unlucky, your owner will try to pull them off, which is painful. Far better to find a warm house or car and sit there slowly melting in comfort.
Soft fluffy snow is relatively gentle on the paws, and fun to roll in, but if there's more than about four or five inches, then normal walking becomes difficult and really I'd prefer to be carried.
Yes, on the whole, I think the trains have it easy.
Posted by Hamish Westie at 14:34 1 comment: 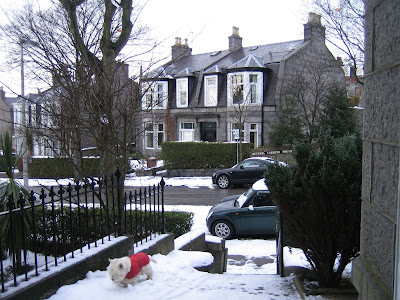 Now that my paws are feeling better, I'm glad we still have some snow in Aberdeen, it brightens the place up.

I don't know if you've ever been to the 'Granite City' , but if not, I think this photo taken outside our front door illustrates my point nicely. The streets are grey. The houses are grey. The skies are grey, usually. And for some extraordinary reason, most people seem to favour 'silver' (i.e. grey) cars.

At least I have a nice and cheerful red coat (but as yet no matching boots....)
Posted by Hamish Westie at 15:56 3 comments: 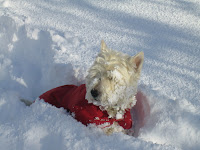 Ow! Frozen slush is very hard on the paws.
Gail says I've got to be brave because I'm a Scotsdog. Apparently I shouldn't even be noticing that we still have lots of snow on Devanha Gardens and it's several degrees below zero just at the moment. Gail's just been down to London where they're all making a big fuss after a recent snowfall, but that's only acceptable if you're a Southerner. And it is true that some human Aberdonians (the less evolved ones) are still to be found wandering around Union Street late at night in miniskirts and crop tops, exposing acres of white, goose-pimpled flesh, seemingly oblivious to the cold.
Well anyway I'm going to make a fuss too. My poor sensitive feet are all sore, and so although I want to go out (as ever), I have to be given time to tread carefully and find a route where the snow's soft and there's no danger of encountering those nasty, stinging salty bits.
Can anyone recommend some nice furry boots suitable for Westies? Red would be best, to go with my coat.
Posted by Hamish Westie at 17:46 2 comments: 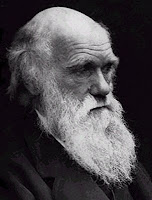 I don't normally watch much TV, but I did enjoy the programme last Sunday night, when David Attenborough was talking about Darwin and evolution.
Now I know it's not the done thing to criticise the BBC's patron saint of Natural History, but it's struck me in the past that Mr Attenborough has been rather too focussed on the sort of creatures you find in wild and exotic places, to the neglect of us domestic species.
So it was good to hear him talking about Charles Darwin, a man both Gail and I admire.
Gail thinks Darwin's wonderful for reasons to do with the stunning explanatory power of his theory, and the fact that he combined being a great scientist with being a decent human being (a rare combination, apparently).
Well that's as may be. What I like most of all is that fact that right there in the opening chapter of 'The Origin of Species', us domestic animals receive due consideration, and the important issue of variety in dog breeds is mentioned too.
Not enough scientists have taken pet animals seriously in the past, I feel. And when they have, the results have been of questionable merit. I don't like the way we're portrayed by the whole Pavlov's dog thing, and as for Schrodinger and his Cat, what sort of a stupid thought experiment was that ?!
Posted by Hamish Westie at 19:22 No comments: 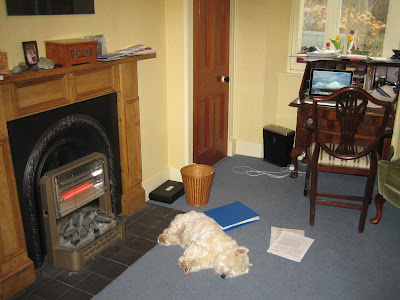 It's a Monday morning. This is me in the study providing moral support for Gail as she begins another week of writing up her PhD thesis. I've offered to help her with one section, the acknowledgments. For example, she could say:
"Above all I would like to thank my faithful friend Hamish, who has provided such steadfast encouragement throughout the process. Without his help, both at home and in the field (and even occasionally in the lab, but shhh don't tell anyone) this thesis would not have been possible. In recognition of this I award him a lifelong supply of lamb bones, fried liver, cheese, cake, and whatsoever additional treats he may desire, at all times, and at his convenience."
That's the sort of thing people write, isn't it?
Posted by Hamish Westie at 21:02 4 comments: