These vets then. How many years is it they train? Ages and ages anyway.
So you'd think they'd come up with some good ideas when you tell them your skin's all itchy. I mean, I've had so many interesting suggestions from my bloggie pals this week.

In fact, I devised my own treatment plan, based on all your kind comments to my last post.

As my paws are sore, I need to be taken everywhere in a bicycle basket, like Petey, which means also that I shall be out in the open air and so can more easily receive all those good vibes, get well energies, extra healing smoochies etc. (The ones sent from over the Pond or below the equator may be a little weak by the time they reach Eastern Scotland).

My first stop will be with new pal Eric Square Dog in London, where together we will sip eighteen year old Macallan whisky, wear knotted hankerchiefs on our heads to reinforce our 'old buffer' status, and perhaps take up Hoover's suggestion and wallow in a soothing bath of porridge. (If only Gail had Petey's Mom's artistic abilities - but you will just have to imagine the scene).

Next stop will be at dear friends Martha and Bailey Basset, as I understand they have arranged to win the lottery and kindly offered to share some of the money with Gail so she no longer has to go to that horrid 'work'.

Then there is some special healing cream stuff to pick up from Ludo.

We shall steer clear of the acupuncturist though (sorry Lisa). I mean, that's like being vaccinated, but a hundred times over all at once surely?

Last but not least, we shall visit with Stella, 'cos she is so lovely, and I just know that if I could spend time with her, I would feel much, much better right away.

So. Sounds pretty good, my plan, right? Why on earth then did the vet just give me all these boring old pills.... 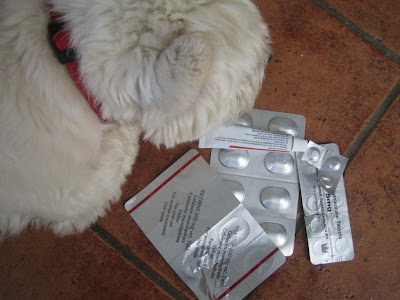 Oh dear, I am feeling out of sorts this week. Things are not going my way.

I've become so used to having Gail all to myself, but it seems that I have a rival for her attention - this horrible 'job' business. 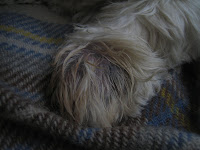 What's worse, I've come over all itchy, and can't stop chewing myself. Look at my poor paw...
(I told Gail to post a picture of my itchy groin area too, but she reminded me that this is a family blog).
And when I went for a walk with my friends Lucy and Florrie yesterday, on the beach at St. Cyrus, OK, it was fun to start with.... 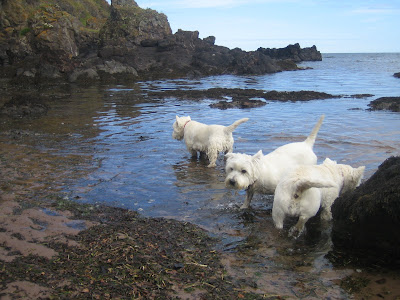 But before too long I started to feel my age, and eventually I came over all shaky and had to be carried. Which is just wee bit humiliating. 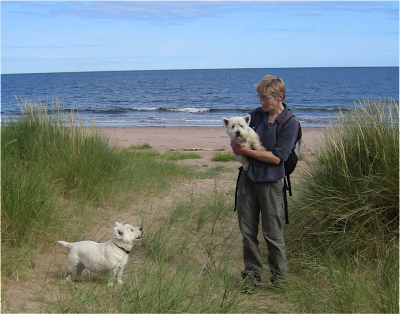 And now it's Sunday and pouring with rain and I haven't even been taken for a walk round the block yet.
Please post some nice comments to cheer me up.
PS From Gail - Hamish is going to the V-E-T about his skin problems on Tuesday.
Posted by Hamish Westie at 10:09 19 comments:

I decided to help Gail find some dinner last weekend. We are 65 miles from a supermarket when we stay at the Loch Torridon cottage, so my hunting instincts come to the fore.
First, I tracked down some mussels. (Now that I'm getting on a bit, I do find that hunting is easier when the prey is fixed to a rock). 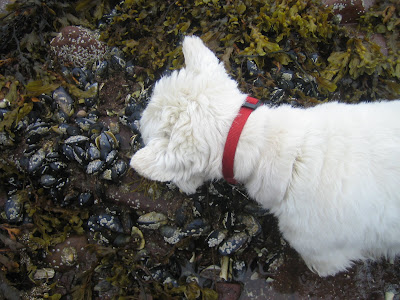 The sheep looked delicious, but I'm not allowed to chase them. Something to do with a local farmer being handy with the shotgun apparently. And anyway, they can run away pretty fast, those sheep - longer legs then me, you know.... 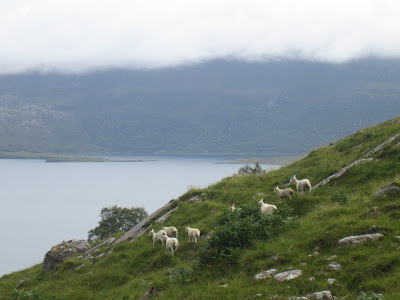 Now, much as I love bones, even I would have to admit that this skull I found maybe wouldn't make for a filling meal. (By the way, can any budding anatomist out there tell me if it's an ex-sheep or an ex-deer?) 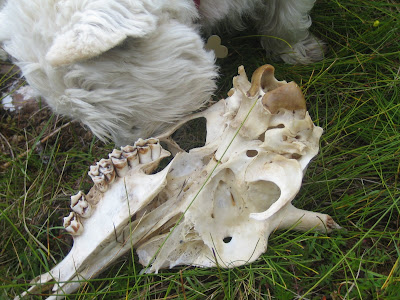 Finally, in the woods, I found some of these yellow fungus-y thingies. Lots and lots of them in fact. Not my cup of tea at all, but Gail was unaccountably excited. 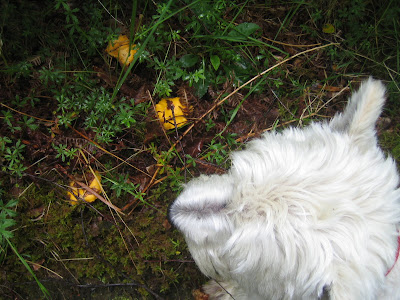 Back at the cottage, I had a little snooze whilst Gail, drenched in super-strength insect repellent AND wearing a midge net over her head, went out into the garden to pick some more human-only stuff (cherries and blackcurrants). 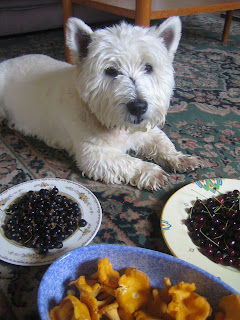 Well Gail seemed to think we'd gathered a fine old feast.
But I checked the goods out quite carefully.
And then decided to opt for a liquid dinner.... 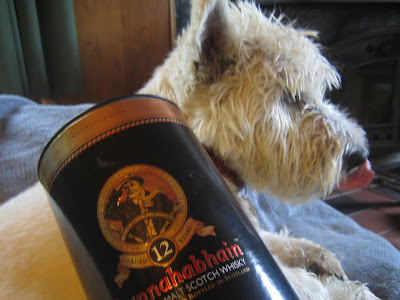 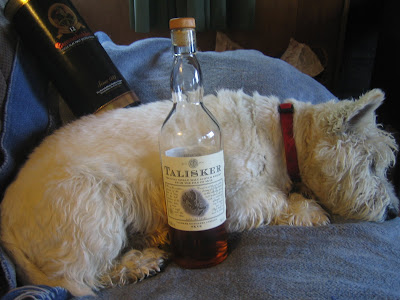 Well first I'd like to thank all of those readers who were so supportive of my job application last week. I haven't had any response yet, but paws crossed eh?
I did point out how my presence can greatly enhance most photographs of the Scottish landscape.  Now, lest anyone accuse me of being big-headed (it does happen from time to time), today I will concede, that just occasionally, the view itself, without me, suffices.
For example, Gail and I drove over to the West Coast on Friday evening and at about quarter to ten we saw the sun setting in spectacular fashion over Loch Maree*. 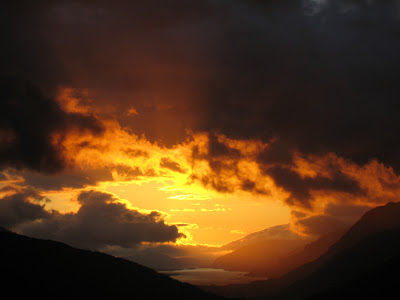 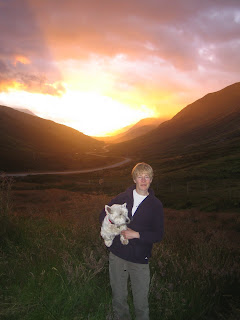 Some French tourists stopped at the same viewpoint, and insisted taking a snap of  Gail and me. But, to be honest, it's not such a good picture is it? With the camera focused on the two of us, the drama in the skies is somewhat diminished (and you can barely even make out the loch).
And here's another shot, taken five miles further down the road. The mountain is Slioch, which contrary to appearances is not a live volcano. I don't expect anyone looking at this photograph will be saying "but where's the Westie?" 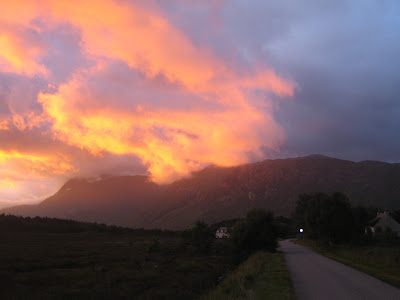 I trust that this post will demonstrate to my potential employers at the Scottish Tourist Board that I do have some sense of proportion regarding my place in the scheme of things. Although, come to think of it, had it been just me, not Gail too, in that rather mediocre photo.........
*Hint for would-be tourists to Scotland. Loch Maree, in Wester Ross, is less famous but infinitely more beautiful than Loch Ness, in my humble opinion!
[PS In the parallel dog blogosphere universe, congratulations to Rosie and Petey - great wedding!]
Posted by Hamish Westie at 21:42 7 comments:

Something to chew on....

Well what with awaiting the response to my job application (previous post) and Petey's stag night providing new data for my parallel universe theory (29th June post), there's been a lot to chew over this week. Good job Gail had a nice meaty ham knuckle handy....
Posted by Hamish Westie at 08:19 10 comments:

What with Gail going out to work again and all that, I think it's time that I made some contribution to household expenses, so this week I have decided to apply for a job..... 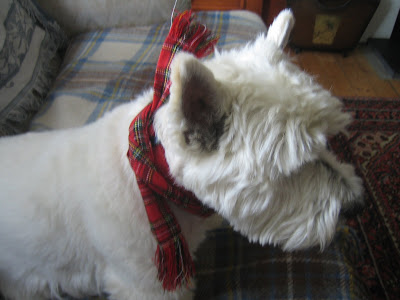 Dear High Heid Yin of Scottish Tourism,
I would like to apply for the (as yet unadvertised) position of Special Canine Ambassador for the Scottish Tourist Industry. I feel fully confident that I have the skills necessary to promote our magnificent country to potential visitors from overseas, for the following reasons:
Should you require further confirmation of my qualifications for the ambassador position, I shall be pleased to supply references from my many friends in the USA and beyond, who will I am sure attest to my capacity to present our country as a delightful place to visit.
I look forward to your prompt response,
Yours faithfully,
Hamish Westie,
Aberdeen.
Do you think I'm in with a chance?
Posted by Hamish Westie at 16:50 16 comments:

"Money doesn't grow on trees you know Hamish".
What sort of a statement is that? Of course I know money doesn't grow on trees. It grows in those little machines you find in walls in the city centre.
So what's that got to do with me having to stay at home alone all day, just when I've got used to having Gail here almost all the time? She's suddenly taken to disappearing shortly after my morning walk, and not returning until well after tea time.
So that's me, home alone all day. Well, a neighbour has been calling round in the afternoon to take me out for a short walk. And at least I can get out into the back garden through the dog flap, and carefully patrol the boundaries, or roll on the grass. Maybe do a bit of excavating too. Or, inside the house, I can position myself on the top of the sofa to look out the front window and keep an eye on what's going on in the street. Bark a little at passers by. And then again, an old chap does need a fair bit of sleep.
But even so. I would like some company. If only I could use the computer without Gail's help, then I could communicate with my blogging pals. Has anyone designed a paw-friendly keyboard yet, I wonder? A bit like those phones you can get for old folk?
I guess I'm going to have to get used to this new regime, at least for a while. Something to do with Gail being able to pay for dog food and vets bills apparently!
Posted by Hamish Westie at 18:44 10 comments: 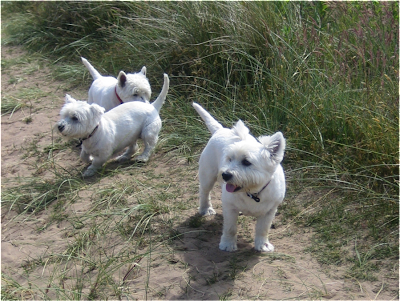 It's been ages since I met up with my Westie girlfriends, Florrie and Lucy. We all went for a walk today in one of my favourite places, the Forvie National Nature Reserve. It's a lovely spot, with an estuary, sand dunes, a beach, some heathland, and lots of eider ducks and terns.
There is one slight drawback - dogs are supposed to be on a lead. But do you know, we met a ranger who looked at the three of us Westies and said it was OK for us to be running free. RESULT! (Only in Scotland...) 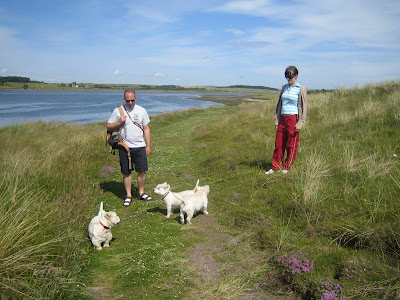 So we entered the reserve... 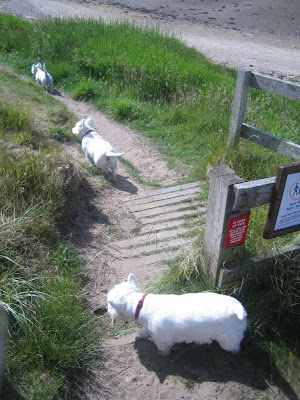 and Florrie and Lucy went for a paddle in the Ythan Estuary (I joined them later). 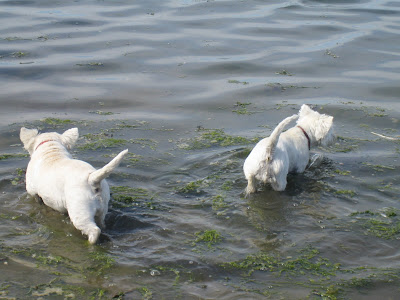 Then we had to cross the  Sahara Desert sand dunes. 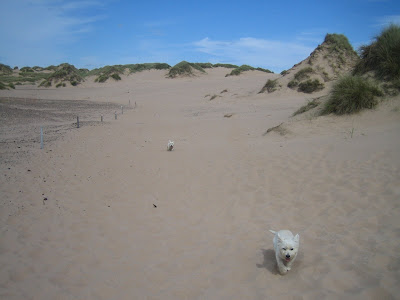 Then another paddle, this time in the North Sea. 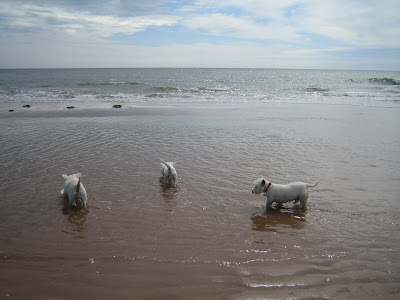 Now I want to point out that when I was a youngster, I had absolutely no problem keeping up with these two ladies. In fact there used to be a certain amount of flirting going on whilst we ran up mountains together...
But as regular readers of this blog will know, these days I concentrate my efforts on more serious matters. And also, well, to be honest, between you and me, I did find it just a teeny weeny little bit difficult trying to run as fast as the girls.  But I'm sure they didn't notice... 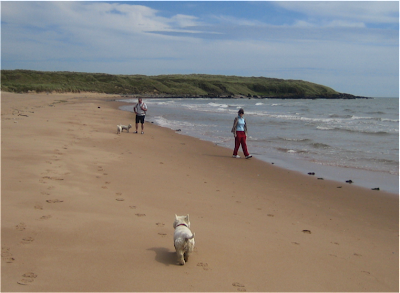 It was a hot day too, so quite a relief to get back to the cars. Florrie and Lucy have a very nice red rug, don't you think? (And a posher car than ours). 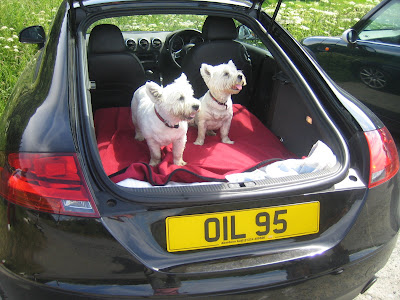 But only I get to sit in the front seat! 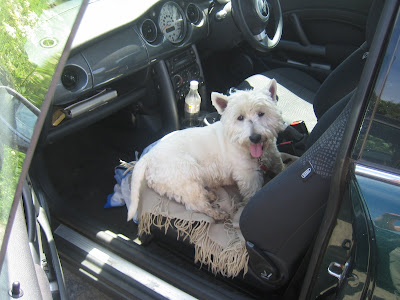 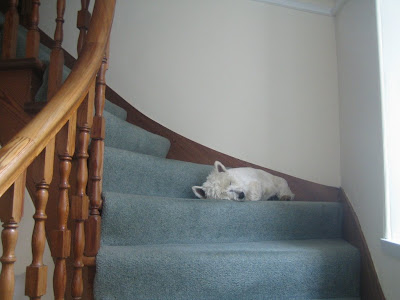 All this hot weather. And thinking about my scientific hypothesis. It's quite exhausting.
Sometimes an old chap just needs to take a break. Don't trip up over me, please.
Posted by Hamish Westie at 09:16 10 comments: