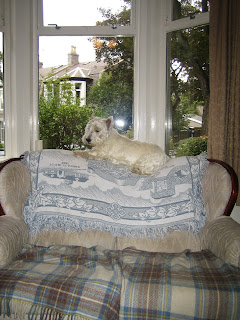 It's a lovely sunny Sunday afternoon here in Aberdeen and Gail has selfishly gone out for a ride on her bicycle and left me behind in the house on sentry duty.

Why can't she behave like a proper resident of this respectable street and spend her free time lovingly washing and buffing her car? I mean, have you seen the inside of the Mini lately? And she even blames me! Right now, there's action man Chris, across the road, putting sponge to metal, Fiona's dad (car washer extraordinaire) is at it next door, and out of the corner of my eye I can see one chap down the bottom of the street who is even hoovering his engine.

Oh, here she is, back from her ride, must rush round to front the door and let her know how cross I am. I do wish Gail would heed Margaret (a wise lady) who keep suggesting Gail adapts her bike, like they do in Holland 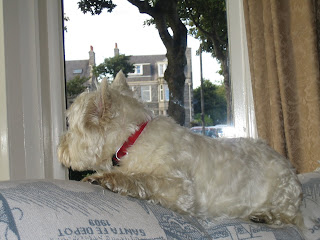 , so I could at least go out with her for rides.

Posted by Hamish Westie at 17:54 No comments:

In my last post I explained how things are at 3 Devanha Gardens South. It's nice to learn that my status here is also recognised by others on the street.

How so? Well yesterday when returning from my morning walk I ran into next door neighbour Stuart and his little red-haired daughter Ella. Ella's not much bigger than me, which I like, and she's only just started talking. She seems to have good grasp of the important stuff. She pointed down the road and said to her Dad "there's Hamish". Then she turned round, pointed to my front door and, with conviction, added "and there's Hamish's house".

Gail looked a bit peeved.
Posted by Hamish Westie at 09:45 No comments:

It's nine years ago, to the day, that I first came to live with my current owner Gail. Way back then, I think Gail imagined that she would remain boss at 3 Devanha Gardens South. How wrong she was...

I think of the struggle for control of this house as a long drawn out war. There have been skirmishes, major battles, quiet phases, ground lost at times, but overall a clear victor emerges. Let's review the main events.

Key to success in battle is control of territory. Herein lies my greatest triumph. Gail ceded the garden at the outset, but gaining access to the house was a long drawn out affair. At first, I was confined to the sun room at the back, with a dog flap to the garden but barred from the kitchen by a strategically placed child gate. One day I managed to get my head stuck in between the bars of this irritating piece of furniture. An unfortunate accident or smart tactics? You decide. In any event, the outcome was that the barrier disappeared and the kitchen area was now mine too.

Penetrating the front sitting room took longer. Gail had this new blue sofa in front of the radiator, and seemed anxious to keep me off it. I humoured her on that one, not letting on that my real target was the old sofa by the window. The back of this forms an excellent sentry post from where I can survey the street scene, make sure the neighbours are behaving, look out for the postman, bark at would be intruders, and so on. A goal well worth fighting for. And lo and behold, my "good" (read cunning) behaviour paid dividends. Once Gail figured that her precious new sofa was safe, that was me, free to roam the whole downstairs.

Gail used to make me sleep downstairs, swore she'd never have me in the bedroom. I decided to use psychology on this one too. I hatched the plan of running out into the garden and barking in the middle of the night, making use of my owner's paranoia about me making a noise and upsetting the neighbours. It worked! And now I sleep at night on my own cosy blanket at the base of Gail's bed. She still barricades me downstairs when she's out during the day, but that I'm prepared to accept. What's the saying? Don't sweat the small stuff.

Perhaps the biggest battle lost was over food. I really prefer tins, and refused for quite some time to eat that boring dry stuff that Gail insists is "good for me". We Westies are famed for our stubborn streak, but in the end the hunger pangs won out, and a can of Pedigree Chum (or better yet Butchers with tripe) is now a rare treat.

The rest were minor skirmishes. I've had to concede defeat on the use of the ironing board and vacuum cleaner, and we've come to an amicable compromise on operation of the hairdryer - OK on Gail, but absolutely on no account is it to be pointed in my direction. I'll put up with being bathed so long as I can dry myself by rolling around on the carpet.

As for walks, well, it's getting late, I'll save that story for another day.
Posted by Hamish Westie at 20:38 No comments:

See this gold star? Gail says I can put this at the top of my blog because I was so well behaved today at the vet. Why she imagines that I might care about some silly symbol is quite beyond me, but, you know, humans, you sometimes just have to humour them....

Far more relevant, from my point of view is that Lily, the nice Irish lady vet, gave me some delicious treats after she'd stood me on her table and poked around my foot, my ears and my tummy. She rubbed my ears a lot, which I like, and was all round very agreeable.

And I am feeling a whole lot better now. Gail's more cheerful too, and it seems we have a new addition to the household. Naomi, the American girl, arrived last night with some very large bags and has made herself at home in the spare bedroom. I haven't had a proper chance to check out all her stuff. Sometimes, if I'm lucky, Gail forgets to give visitors the food security briefing. Hope springs eternal!
Posted by Hamish Westie at 19:45 No comments:

Every time we go to the vet (which is often), Gail comes away muttering something about sending me out to work for a living. Or else she starts going on about how grateful she is for the NHS, and how humans at least are treated for free in this country. It seems that all these medicines I'm taking at the moment are rather expensive.

You know, I'd really like to help with the money, but what are the options? Let's think.

My ancestors earned their keep by digging out and chasing after small animals, rabbits and such-like. Well I do still like digging, but rabbits can run so much faster than me and I just can't be bothered with them any more. As a youngster I'd try to chase anything - grouse, mountain hares, deer even, but with age came wisdom, and I learnt that energy was more efficiently spent in hunting for chocolate biscuits in certain people's houses, rather than in futile pursuit of wild animals on the hills.

What do other working dogs do? German Shepherds seem to have an exciting time helping out the police, and I quite fancy having a go at that, but, strangely, the idea of a Westie assisting in the fight against crime doesn't seem to be taken seriously in some quarters.

Being a sled dog rather appeals too, as I do love rolling around in the snow, and several friends of Gail who've tried to walk me on the lead have noted that I'm surprisingly strong for my size. But then with global warming, this may not be a career with a promising future.

There are other jobs - guidedogs, gundogs, sheepdogs for example. Gail points out that dogs employed in these areas all score highly in the obedience stakes, and that this is not my strong suit. (By the way, I've noticed that humans often tend to confuse the traits of obedience and intelligence in dogs. I would ask, how clever is it to slavishly follow idiotic and pointless commands !?)

Like Kate Moss, Naomi Campbell and company, I could of course trade on my good looks. People in public places often try to take my photo, purely on the basis that I'm cute. I've even participated in a couple of wedding videos down in Duthie Park. Once, when I was on holiday, we stopped at a cafe by the Glenfinnan Monument, where a man was charging bus loads of Japanese tourists to be photographed with his scraggly collection of owls and hawks, then the same tourists came and posed besides me and no money changed hands at all!

One thing I know I'd be really, really good at is being a sniffer dog at the airport. Want to know who's smuggling in illicit quantities of finest Swiss chocolate - I'm your man! Oh. Gail says that customs aren't interested in the ability to detect microgram quantities of Lindt through several layers of packaging. Shame.

Looks like it's Gail that's going to have to go out and find a proper job.
Posted by Hamish Westie at 10:21 No comments: 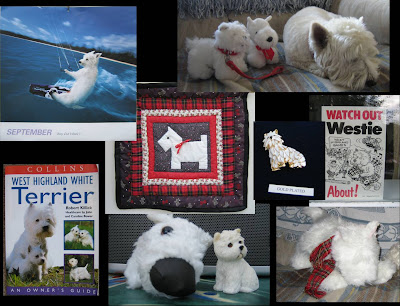 Pleased to say that I'm feeling better than last week. Leg a bit sore still, but improving slowly. And I think Gail has got the point that I've recovered my appetite.

Spending so much time indoors has made me realise just how many other Westies there are in this house. People seem to like giving them to Gail as presents, as if I'm not good enough by myself! Perhaps some readers will recognise the items pictured above. Can you spot the real me in and amongst all the fakes? Don't get me wrong, I'm not complaining, imitation being the best form of flattery etc.

But just remember please. The water-skiing thing. Not realistic. As I've said before.
Posted by Hamish Westie at 18:59 No comments:

You see, at least I'm not too under the weather to make an atrocious pun! I'm trying hard because I know Gail has been doing her best to keep me cheerful these last few days.

She took me into the University today and I had a little stroll/hop around the Cruickshank Botanical Gardens. Lots and lots of exotic trees to sniff there, and, I might say, Gail, those borders are better kept than at 3 Devanha Gardens South, aren't they? But before long the walking got too much; I came over all shaky and was really hurt when one of Gail's fellow researchers accused me of "milking it a bit" when she saw me being carried back to the car. Huh! My foot is still very sore you know.

Keeping it positive, we had some lovely visitors this week, Yit and Stephanie. Gail says they're from St Andrews but they didn't look or sound like Fifers to me. Yit performed sterling duty in the tummy ticking department, and that definitely cheered me up.
Posted by Hamish Westie at 17:27 No comments:

I don't want to bore everyone by going on and on about my medical problems, but I'm in rather a bad way at the moment and can't think of anything else to talk about.

Before I just had an itchy foot and so a sore paw. Now my left leg hurts so much I can't put any weight on it or walk more than a couple of yards, and Gail has to carry me up and down steps. I'm feverish. I don't feel hungry, or even thirsty; I really don't feel like doing anything at all.

So I spent yesterday at the vets, being variously prodded and poked and stabbed with needles. Now I'm home again, still poorly, and Gail is going round with very long face too.
Posted by Hamish Westie at 07:51 No comments: