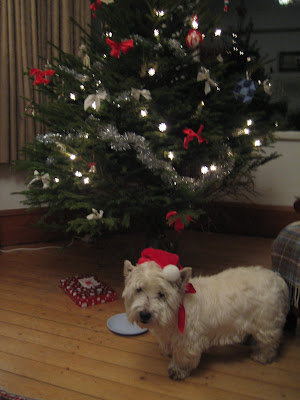 Posted by Hamish Westie at 16:42 No comments:

Apparently San Francisco is a Westie-free zone. Quite why, then, Gail would want to spend nearly two weeks there is a mystery. But that's where she's been it seems.
She returned last night, equipped with a whole series of frankly lame excuses for not bearing gifts. For example:
"My bag's still stuck in Terminal 5"
"I went to the 'Best in Show' pet shop in Castro, but they'd sold out of George Bush doggie chews"
"All the dog coats were designed for chihuahaus"
"You can't bring meat in through customs"
But I know the truth. She spent all her money on food. For herself. As usual.
At least some people do buy me presents. That nice lady Diane at the German class sent a handy little towel, small enough to put in a pocket. So no excuses now Gail for not drying me off properly after we've been out walking in the rain.
Which reminds me. Gail! Isn't it time for a walk in the park? Woof woof.......
Posted by Hamish Westie at 13:17 No comments:

I was right. I knew it. Gail's gone away, and I've been left in the care of Naomi, the lodger.
Slowly, I'm licking her into shape. (Metaphorically, that is, not literally. Don't want readers to think I'm the sort of dog that slobbers all over people, I'm not). Naomi does seem to have some different ideas to Gail when it come to walks, bedtime, rights to sit on furniture etc. But it's OK, we rub along just fine.
I think Gail's taken her new toy with her, that shiny little computer she calls 'McBook' or somesuch. I'm beginning to think she's more interested in that thing than me at the moment. Oh well, I guess she'll get over it. I'm confident I have more enduring appeal.
And I'm sure Gail's missing me, I can feel it.
Posted by Hamish Westie at 19:58 No comments:

Uh oh. Something's up. I can always tell.

Gail went in to the box room last night and dug out a suitcase. I know what that means. And I'm wise to her tricks. She tried to divert my attention by giving me supper early whilst she started sorting out clothes and stuff. As if I'm so stupid I won't realise that I'm about to be abandoned.

Perhaps if I rush around the house looking all anxious and pleading then she'll feel so bad she'll take me with her. Yes I'll try that first and save the incessant barking routine for later.

It's never much fun when Gail goes away. And of course, how do I know that she's coming back? And who will help me write this blog?
Posted by Hamish Westie at 10:00 No comments:

We have had a lot of visitors to 3 Devanha Gardens South this year. It occurs to me that, consistent with my undisputed position as master of the household, it is time to publish some guidelines as to how visitors are expected to behave. 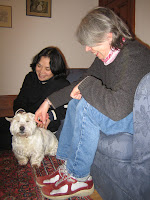