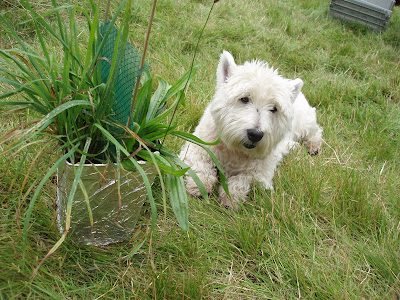 So. This 'job' Gail has. She took me along the other day. Didn't look like work to me.

I mean, she and this bunch of other 'researchers' stood around in this beautiful walled garden all day, up at Mar Lodge in the Cairngorm Mountains, and in between tea breaks, they carried plant pots back and forth and sometimes poured stuff into the pots.

Oh. It seems I'm going to get a lecture from Gail. I have got hold of the wrong end of the stick apparently.

This is a VERY IMPORTANT SCIENTIFIC experiment. It's all about a competition for resources between two plants. Dactylis (that's a grass) and Plantago (er, that's a bit like a banana, or something??) 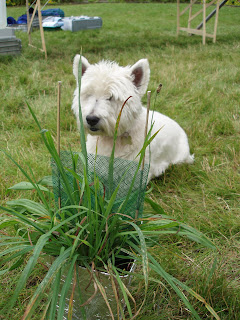 See, here are the two plants in a pot. No, it doesn't look like any sort of a contest to me either. Perhaps it's easier to think of it in terms of two dogs of different breeds competing for food from the same bowl. I'm imagining my friends Kira and Scampi. For those of you who don't know them, that's a Siberian husky and a border collie. Which one ends up with the most food? Does it make any difference whether they're both standing on top of a hill or not. I'm sure it all makes sense to you now.....If not, perhaps you might like to tell me your own ideas on how the experiment could be improved..... 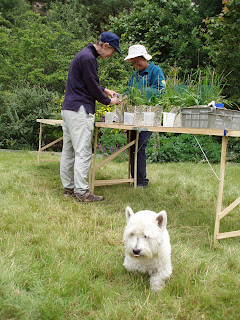 Gail was working with a very nice lady called Miranda. That's her in the floppy hat. I know she's nice because she gave me some of her lunch. Unlike one other chap there who kept a very tight hold on his ham sandwich. Some people are so selfish.
Posted by Hamish Westie at 17:53

Hi Hamish
Well you have lost us! Then again we are bassets - our chief skill is our nose not our brain!
We generally find that people in floppy hats are nice!
Anyone who shares their food we like - we would not like those who clutch their ham sandwich to their bosom!
We think it is cool that you got to go to the Cairngorms!
We wonder if all these scientific research folk are just kidding on whilst enjoying the mountain air and afternoon tee at the Lodge.
After all if there is something going on that we dogs don't understand is it possible they are just kidding?
Just hypothesizing you understand. (we might need Gail to help with the spelling!)
love your lots
Martha & Bailey xxx

PS That will be the tea you drink and not the tee you use at golf - we know how fond you are of the game!

Hi Hamish! Did the porridge bath and the stuff in the bottle do the trick for your itchies? I do hope so.

That is an interesting experiment you are in on and I am happy Gail is taking you on this important mission. This way you are getting brain exercise as well as body exercise.

Anyway, I am glad you are better and out again. I see no reason why you cannot be the Scottish choir master and sing the hymn to Scotland (I forgot the name of it already). Singing is another good exercise.

Silly little me....I would've thought Scotland a tad chilly for nanner plants of any kinds? We have em here in sunny tropical Florida and when it gets cold in the winter they get all brown and frostbitten looking. Really? Youse guys gots tropical stuff there? Youse guys gots global warming out the yahzoo then.
Bonnie...scratchin' her ears over this one

Hey there, Hamish
Firstly, heartiest congrats on your Mom becoming a 'doctor'...we know how much hard work that is, Well done!
Secondly, your Mom's experiment is fascinating - even though that's not our field. What we can say is that there are so many 'plantago' species here in SA which are trying to take over our areas (especially our wetlands). When we walk down to our local river, it is rife (and very difficult for us to get rid of). We believe that only a few of the plantago species -about 5- are indigenous). We have also heard that there is quite a bit of medicinal value in plantago (used by ethnic herbalists here!), so your Mom's experiment is very important!
Our bet is that the plantago will win!
Tons of licks
Maxdog
(psst...why not leave some peemail in the experiment...that will hot things up!)
http://www.biodiversityexplorer.org/plants/plantaginaceae/plantago.htm

Hamish, thank you for your kind words for my Mom. I am taking care of her and she is getting better. I don't understand the grass thing either, but it is nice that you are able to go with her. My Mom and Dad keep telling me they must go to the worky jobs to get green papers to buy me food and treats. As long as my tummy is full in the end I guess I can live with it, but it does seem silly.
licks and sniffs, Sasha

We have a town called Aberdeen here in Washington State. Guess what town it was named after?
Sherry
Alanis & Miro Airedales

Hi there, Gail (sorry Hamish)
In regard to your project,I thought you might be interested: In 1995 the SA government launched the "working for water" project: see http://www.dwaf.gov.za/wfw/problem.asp
The idea was to eradicate all alien plant species in our country and to 'clean up' our water sources and pursue sustainability.
Although Im not a botanist, I am pretty sure that we have plantago lanceolata (Narrow-leaved ribwort) in our local river bed. I have taken a series of photos for you (if you are interested.) Please would you contact me at:
lescaryl@mweb.co.za and we can discuss in more detail. would love to help you.Regards, Caryl

Hamish. We appreciate your perspective (and analysis) of the research. We most clearly understand when you turned your back on it in the last picture, and simply walked away. From what we gather, the plants will be there when you return. Some dropped lunchable morsels may not.

We were just thinkin', though. If plantago has such good medicinal value (as per Max), why didn't you just eat it?

Glad your itchies seem to be getting better.
Your pals,
Jake and Fergi