Doing my bit for Amnesty 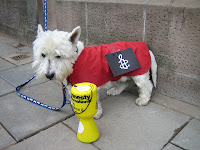 One of my many roles in life is as unofficial mascot for the Amnesty International group in Aberdeen. Whenever they want to collect money from the public, I get wheeled out in a blatant bid to pull in the animal loving punters.

It's funny how humans tend to believe their own publicity about being the most intelligent species. Despite so much evidence to the contrary. For example, you have Gail standing there on the street (today we were in Stonehaven), resplendent in yellow Amnesty sash, 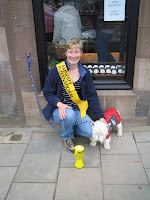 holding a collecting can clearly labelled Amnesty International. On the can it also says something about fighting injustice and torture and helping prisoners of conscience. But a worrying number of folk just see me, stood there by Gail's side, say "Aw, isn't he cute", donate some money then tell Gail "I always give to animal charities".

Gail asked me to say that if you want to find out more about the local Amnesty group, see www.aberdeenamnesty.org.uk
Posted by Hamish Westie at 14:54